Update Required To play the media you will need to either update your browser to a recent version or update your Flash plugin.
show hymn
EN Мы с тобой одной крови

Honored Worker of Culture of Ukraine, Director of the Nikolaev Zoo Vladimir Topchii


Our zoo is one hundred. Five generations of specialists have already given and are giving their knowledge, efforts and labour to the favourite business. Thousands and thousands of animals have gone through its collection. Different events took place there. In order to preserve the memory of the past, the idea about creation of zoo museum was born. The first museum exposition was created in 1988. But naturally, a great work should be accomplished before the opening of the exposition. There were many relics in the zoo departments. Our people collected eggs, skulls.
And when the “critical mass” had been accumulated, our museum was born. The history of some our exhibits is very interesting. You can see the photo – album in the museum – window, devoted to the zoo founder N.P. Leontovich.
That album was done by his elder son Alexander at the beginning of the XX century. There are two gypseous sculptures of the girls in the Terrarium. The fishing girls were made in Germany, at the end of the XIX century. Earlier, there were glass aquarium – cases with exotic fishes at the feet of those figures. You can also see the gigantic shells in the museum exposition. Genuine portrait of Nicholas P. Leontovich is the central part there. His younger son had given that portrait in splendid gilded frame to the zoo.
The granddaughter of the zoo founder had brought to the museum the wooden clock “ cuckoo”. In the next museum – window there are photos, documents and personal things of F.I. Nichikov- the zoo director (1935-1967) and his wife – the livestock specialist.
Unique exhibits – real entrance tickets, of the period of fascist occupation (1941-1944) and also the reference book of the visitors (1937-1952) had been found in the zoo archives. That book keeps the impressions of people about old zoo. A small museum window is devoted to our veterans.
It is very important for us to preserve their names and faces. A model of new zoo, made in 1989, is situated in the centre of the room. The museum visitors are very interested in the collection of so - called “ wet preparations”. The first examples of them were prepared as far as Earlier it lived in the in pre- war time. A Black See fish “ a sea cock” is kept in a glass jar aquarium - case of N.P. Leontovich.
In the fifties the whalers of “Soviet Ukraine” had given to the zoo the foetus of the whale. During the same years a preparation of new – born brown and polar bear –cubs was prepared. In the eighties nineties the rest “wet” preparations were created.
They are newborn animals of different species, helmints, some organs of the animals. The skull collection of the animals from the tiny weasel to Indian elephant is the greater part of the museum exposition. Many skulls belong to rare species. Craniological collection is considered to be not only of educational but also of scientific value.
Practically, all skulls in the museum belong to the animals of our zoo. There is a collection of guides of world zoos in one of the windows.
We also collect photos, documents, concerning the history of our zoo. The important part of the museum work is not only the collection of materials, but also their systematization and description.
Museum without visitors – is a dead museum. Naturally, it is pleasant for us to see people there. The reference book for zoo guestsis kept in the museum. Students, naturalists, pupils come here to study its collection.
At present as far as Earlier it lived in the our people’s interest to it is clear. Unfortunately, our zoo museum exists on a voluntary basis. There is no keeper in the staff. And the very room is not quite adapted to the exposition. We have plans in future to create a museum exposition in a large spacious hall with up- to – date equipment and specialist staff. The given museum in the zoo enables us to vary the scientific – educational work with the visitors. Practically, each zoo has an opportunity to create its own museum, preserving its history and prolonging the life of animals in a new quality.

Honored Worker of Culture of Ukraine, Director of the Nikolaev Zoo Vladimir Topchii


Historical information
INTERESTING FACTS FROM THE HISTORY OF ZOO 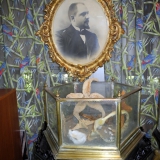 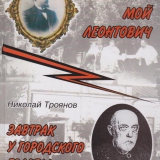 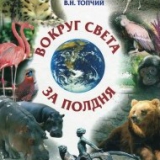 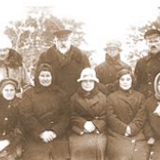 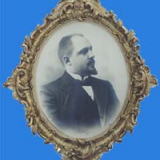 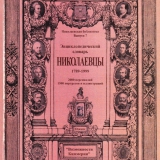 — General Meeting of the circle young naturalists - 1939 there is F. G. Nichik in center
our motto
Only our common efforts we can preserve this beautiful and wonderful world of animals ...